Vitamin D deficiency has been plaguing the entire globe, and is proving to be the most prevalent and most silent modern-day pandemic. A whopping 75% of Americans are vitamin D deficient. This number is even greater among Latinos and African-Americans who have the lowest levels of vitamin D, estimated at an unbelievable 90%. Despite being well-known for its advantages in bone and skeletal, development, a deficiency in vitamin D produces conditions far beyond abnormalities in bone, calcium, and phosphorus metabolism. Deficiencies in vitamin D have been associated with numerous cancers, such as colon, breast, and prostate; also, with autoimmune syndromes, and even cardiovascular disease. And if that wasn’t enough, mental health consequences have also been making recent headlines, where inadequate vitamin D has been strongly correlated to depression, cognitive impairment, and even the development of schizophrenia. Vitamin D deficiency has also been linked to the pathogenesis of metabolic problems such as obesity, diabetes mellitus, and also hypertension, all of which African-Americans and people with psychiatric illnesses are especially vulnerable. See the connection?

Vitamin D3 is the human-produced form of the vitamin, which is produced primarily from skin exposure to sunlight, and secondarily from food.

Vitamin D3 is essential for:

So, what’s the problem?

The best and most abundant source of vitamin D is sunlight. During exposure to sunlight, the skin absorbs the sun’s radiation where it is converted to previtamin D3, and then is metabolized into vitamin D3. Unfortunately, not all sunlight produces vitamin D. It is only synthesized in the skin from ultra-violet B or UVB radiation. This is where the problem begins. UVB availability is highly dependent upon four major factors – time of day, season, latitude, and skin pigmentation. The rays necessary for dermal vitamin D production are only received all year round in places that lie below the 35◦ latitude line. In the United States, this is the Georgia/North Carolina border on the east coast, across through the California/Nevada southern tip, and on to the California Pacific coast. Everywhere above this line receives zero UVB for the most part of the fall and the “entire” winter. For African-Americans this problem is heightened because melanin inhibits UVB absorption, so much more exposure is required to synthesize the same amount of vitamin D as their white counterparts. In fact, data from NHANES III (3) illustrate that, even in the southern states, 53%–76% of non-Hispanic blacks compared with 8%–33% of non-Hispanic whites are vitamin D deficient.

So, what’s the answer for the lack of UVB?

Vitamin D can be obtained from our diets, and many food companies attempt to provide the absentee nutrient through the process of fortification. A quick exploration down the aisles of your local supermarket will reveal a plethora of processed foods fortified with vitamin D, such as milk, bread, cereal and “good old” orange juice. These manufacturers have consumers believing that they are getting vitamin D. The real truth is that they fortify their products with vitamin D2. Vitamin D2’s bio-availability is so poor that the American Journal of Clinical Nutrition states that it should never be considered, regarded or claimed as a nutrient suitable for supplementation or fortification. So, if you see Vitamin D2 on a label, run for the hills. Vitamin D3 is actually found in the following common foodstuffs: salmon, cod liver oil, herring, canned tuna, and egg yolks, but aside from them being animal-based, they all have their undesirable challenges, like parasites, estrogen and allergens.

The best form of dietary D3 is found in vegetables and fruits, but unfortunately, they are few and far between. The great news is electric pHood™ has done all the work for you, and we’ve formulated our very own D3. D3 is an all-natural organic plant-based vitamin D supplement rich in cholecalciferol — the biologically active form of vitamin D that your body automatically produces when its exposed to sunlight. Derived from Reindeer Lichen, and other powerful D3 sources such as Mouse-Ear Cress, Dulse and Red Algae, the electric pHood D3 is the highest bio-available formula anywhere that supports everyone to meet and even exceed their daily vitamin D requirements*. Click on the link below now to get your D3. 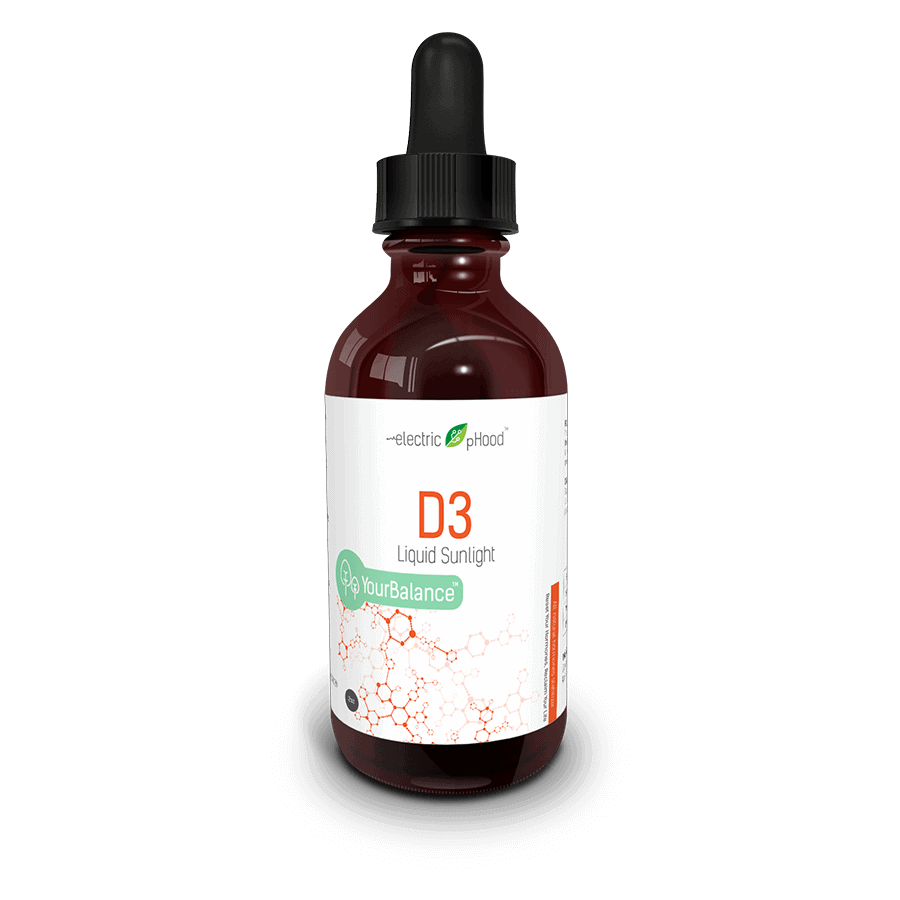